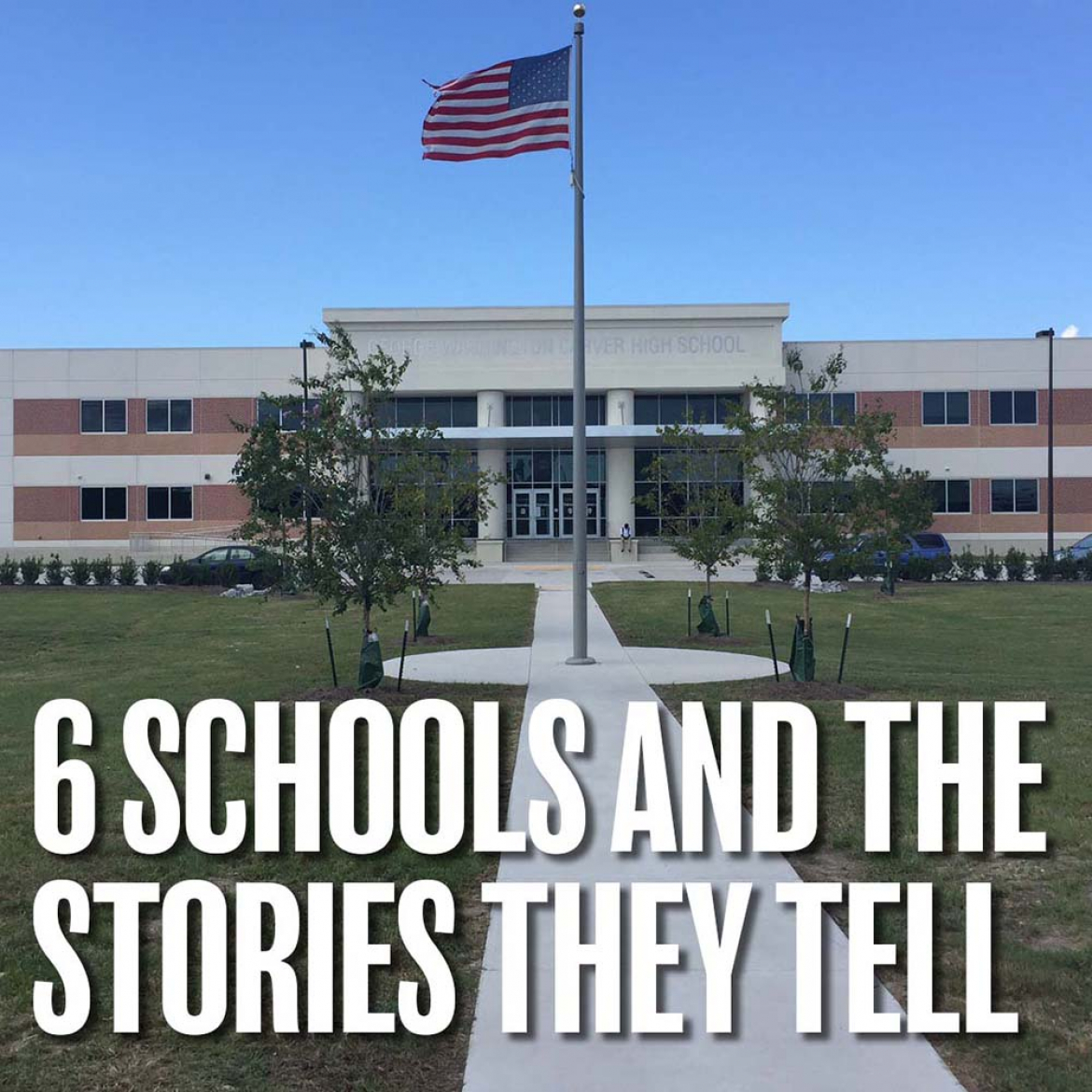 Dominic A. Willard, Jr., AIA
LEED Green Associate
Principal
The public schools in New Orleans have helped shape the city through its history and have headlined news stories covering racial equity, integration, management upheaval, school performance, devastation, and rebuilding. While we’ve designed and renovated public schools in the city, taking to heart the school’s context in its neighborhood, Manning’s engagement in two projects have given us a system-wide vantage that reminds us of some of these pivotal moments in history. Recently, we’ve completed the process of assessing existing public school buildings in New Orleans and engaged in the project management of a number of these schools.

Six schools scattered among the neighborhoods of New Orleans tell stories that paint a picture of the evolution of the Crescent City.

Most of the city’s schools were decimated in 2005 when Hurricane Katrina struck, and the levees breached. It was a moment that divided time in New Orleans—before and after The Storm. The school system had to practically start over. Thirty new schools were constructed, and fourteen existing schools were fully renovated. Even with this huge investment, resources were not able to return all schools to service. Some existing schools were partially renovated, leaving further repairs to the future, and others were shuttered or sold.

The school buildings, besides being vital to the education of students, tell us stories about place and community. The Katrina story touches every school, but we also learn about the founding of public schools in the city, integration in New Orleans, social justice, connection to community and the world, and aiming for the future. 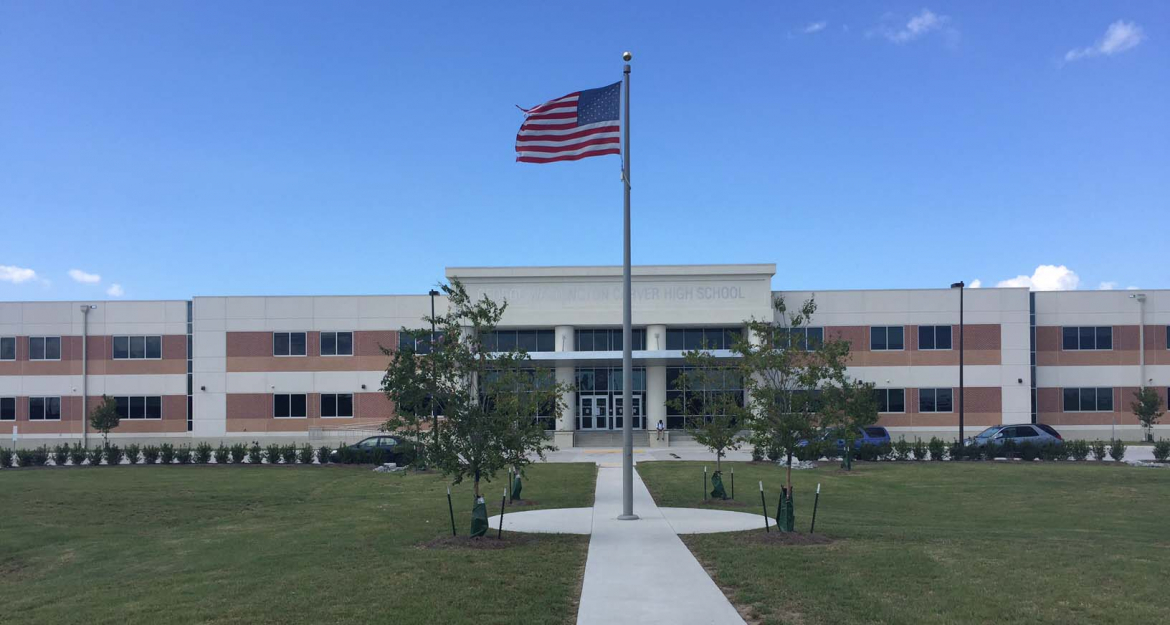 George Washington Carver High School’s longstanding community legacy began in 1958. The school has been an anchor through the decades as residents of the Desire neighborhood grappled with poverty, blight, crime, the largest housing project in the nation at one time (Matsumaru 2010), and Hurricane Katrina.

The original school designed by the noted architectural firm of Curtis and Davis was damaged beyond repair in 2005 when Hurricane Katrina left the Ninth Ward looking like an apocalypse. Once families returned, the school operated out of temporary buildings on another site. Finally, in 2016, the new Carver High School was constructed on the original site, using FEMA funds. Manning designed the new LEED Silver school as the design arm of the design-build team.

Carver’s buildings have been transformed as well as its educational performance. The school’s website reports that “in 2018 and 2019, Carver ranked #1 in growth city-wide among open enrollment schools serving grades 9-12” (G. W. Carver). The school is a testament to persistence through adversity and community accountability.

Learn more about our work at G.W. Carver here. https://manning.xyz/projects/george-washington-carver-high-school 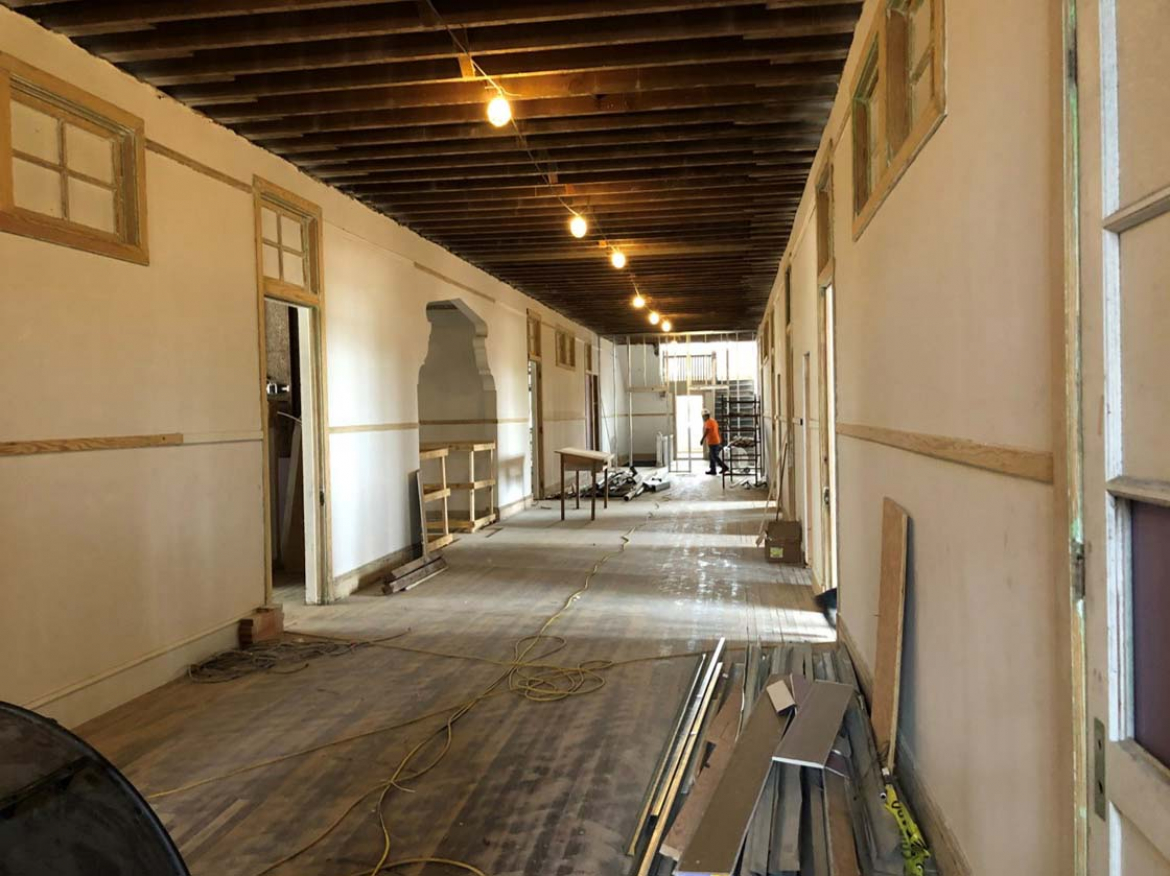 Next, the story of desegregation is told through the lens of two elementary schools: McDonogh 19 and William Frantz Elementary. Both schools are located in the Ninth Ward. Both schools were designed by the prolific school board architect E. A. Christy. Both are designated as historic landmarks.

The schools were the first in New Orleans to be desegregated in 1960 when federal marshals escorted African American first-grade girls into the formerly all-white schools. Leona Tate, Gail Etienne, and Tessie Prevost, known as the McDonogh Three, integrated McDonogh 19, and Ruby Bridges integrated William Frantz. Their legacy lives on, each school paying homage to the pivotal events, but the two schools have had different outcomes.

McDonogh 19 is named for John McDonogh, the benefactor providing funding for so many public schools in New Orleans and Baltimore that they were numbered. Old-new-orleans.com reports that over thirty McDonogh schools were built in New Orleans originally, though many no longer remain and others were renamed (Brister). Unfortunately, McDonogh 19 was one of the schools shuttered after Hurricane Katrina, falling victim to blight despite its significance and historic designation. Before being totally lost, Leona Tate’s foundation was able to partner with developers to purchase the building, saving it from dilapidation. Manning is currently renovating the historic building in an effort that will transform it into the TEP (Tate, Etienne, Prevost) Interpretive Center, which will serve the community as a museum, community center, and also senior housing. The McDonogh Three and their contribution to Civil Rights in New Orleans will not be forgotten.

William Frantz remains an operating elementary school. The building was renovated to maintain its historic significance and a modern addition now serves a growing student population. The classroom where Ruby Bridges sat in first grade has been preserved to commemorate her bravery and contribution.

Both schools offer an opportunity for students and adults to learn about the struggle for school desegregation and what it means to the Ninth Ward, New Orleans, and the nation. Looking at a preserved classroom in either building, we can all wonder what a six-year-old child would feel, sitting there as a throng clamored outside.

You can learn more about this project here. https://manning.xyz/news/boards-tate-etienne-prevost-interpretive-center 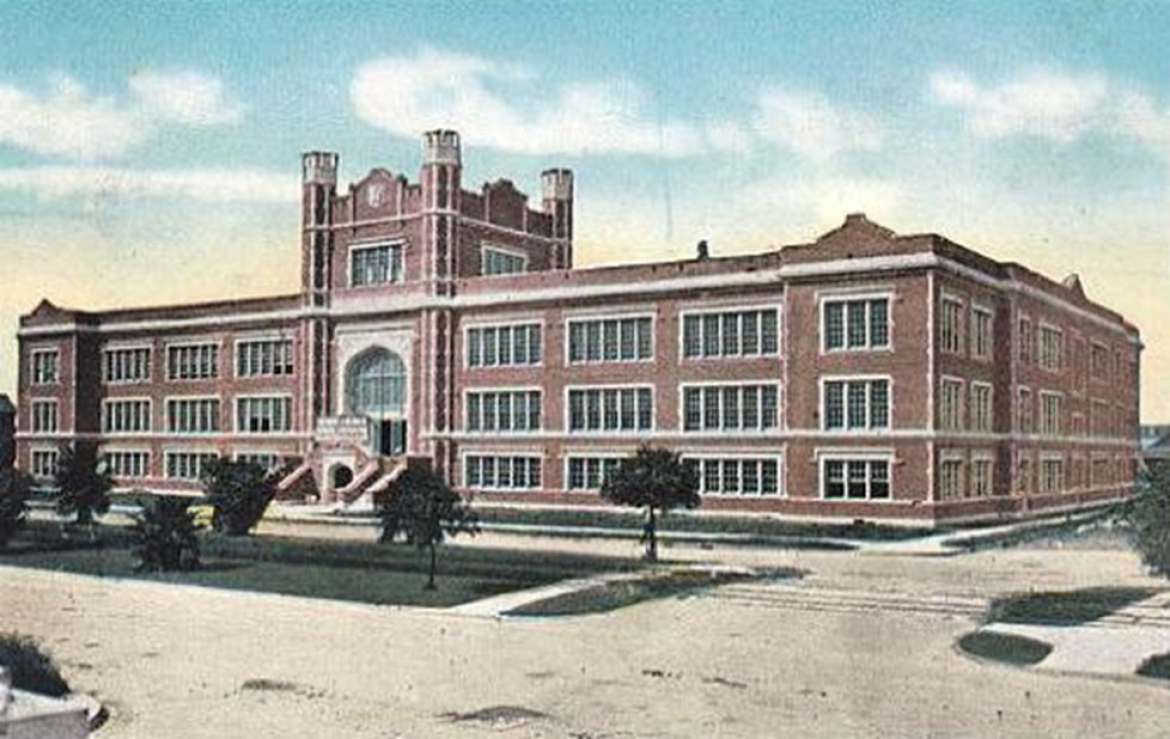 With over a century of history, Warren Easton has plenty of stories to tell. The school opened as a boys’ school on Canal Street in 1913 in its stately brick building. Changes soon followed. According to the school website, in 1952 the school became co-ed, in 1967 it became integrated, and in 1977 it converted to a fundamental magnet school (Warren Easton). And of course, in 2005 it was ravaged during Katrina and its aftermath.

Reopening after Katrina was a formidable challenge, and it took the resources of the community and benefactors to make that happen. The Rotary Club donated countless hours of labor to rehab the building interiors and hundreds of thousands of dollars (rotaryclub.org). Actress Sandra Bullock, without previous connection to the school, became a substantial benefactor, raising money, acting as an advisor, and even delivering a graduation address in later years (Plaisance, 2013). The school reopened as a charter school in 2006, just one year after the devastation.

Warren Easton prides itself on engendering a sense of family among students and faculty. It’s extensive list of notable alumni includes many who have remained active with the school. Arthur Hardy, the noted Mardi Gras authority, was instrumental in the Rotary Club’s engagement after the storm. Pete Fountain, Trombone Shorty, Master P, and Louis Prima all attended the school along with Charles Foti, former Louisiana Attorney General and Harry Connick, Sr., former Orleans Parish District Attorney.

Ben Franklin’s achievements make it noteworthy. Besides its high achieving academics—US News ranks it #14 in charter schools nationally (US News)—the school has been a local trailblazer. The school website reports that Ben Franklin was the first desegregated high school in the city, and now it hosts a diverse student body representing every neighborhood in New Orleans (Ben Franklin).

The high school opened in 1957 in the former Carrollton Courthouse. Previously, that historic building had housed McDonogh 23. When Ben Franklin’s student body had grown beyond its capacity, the high school moved to its current location near Lake Pontchartrain, abutting the University of New Orleans. The Carrollton building was repurposed for another school after Ben Franklin’s move, becoming the home of Audubon Charter School. Manning worked with architect Eean McNaughton on the 1990 award-winning new school for Ben Franklin.

Sophie Wright Charter School has a rich history that began with its founding by a community activist and continues today with the school’s partnership with the community.

The school’s namesake first opened a school for girls in 1880 when she was only fourteen in her parents’ home. That venture grew into the Home Institute, which was a day and boarding school for girls that also offered a night school for men and boys who could not afford a traditional education. Sophie B. Wright’s other philanthropic pursuits included opening a home for disabled children in New Orleans and a retreat that served underprivileged women and children in Mandeville, Louisiana. (The Historic New Orleans Collection.) The Historic New Orleans Collection notes the recognition she received for her commitment to education and those in need:

In 1903 Wright was awarded the Daily Picayune’s Loving Cup, an award given annually to celebrate the philanthropic work of a local New Orleanian. Wright was the third person and first woman to receive the award. Shortly before her death in 1912, the Sophie B. Wright School, a high school for girls, was named in her honor. (The Historic New Orleans Collection)

She died the same year.

Like most New Orleans public schools, Sophie Wright converted to a charter school, and since the conversion, the school’s performance has significantly improved. Continuing its legacy of community engagement, the school partners with contemporary community groups such as Southern University at New Orleans, Tulane University, and members of the Touro Synagogue (Williams 2016).

And like McDonogh 19, the school is one of the many in New Orleans designed by E.A. Christy. A century later, the 1912 building was renovated by Waggoner and Ball Architects, preserving the historic structure and elevating the school to new century standards.

NOLA Public Schools is responsible for managing school properties for the public school system, which accounts for all publicly funded schools and privately operated charter schools in New Orleans. NOLA Public Schools undertook the task of collecting data and assessing the condition of 8.5 million square feet of school buildings on ninety-one campuses. The effort supplied the information it needed to set priorities for the allocation of resources, drive the master plan, and form a database of accurate information for use in daily and long-term capital planning activities.

Manning worked with CSRS to assess the schools that range from new construction to buildings that are over a century old. The process included detailed building assessments and estimated repair costs.

In addition to the school assessments, Manning was on board for program management services for the New Orleans Public School system. To date, this work has included Ben Franklin Elementary, McMain Secondary High School, New Orleans Charter for Science and Math High School (Wicker High School), and Hynes Charter Elementary School. Working with CBRE|Heery & Vanir Construction Management, we’ve provided daily onsite services during construction to resolve issues and promote a smooth construction process. We were honored with a Project Achievement Award for program management services for Ben Franklin Elementary Science and Mathematics School.
--- Dominic Willard, Jr., AIA is a principal at Manning and leads our education sector projects, including many with special considerations such as historic preservation, disaster recovery, fast-track schedules, and construction phasing. Mr. Willard is a LEED Green Associate.